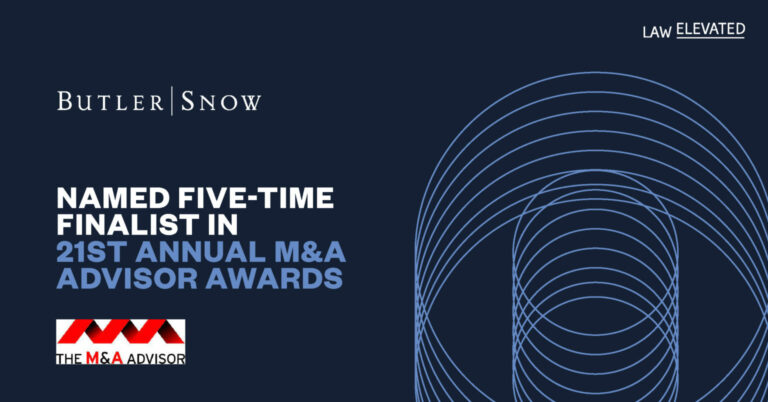 Butler Snow has been named a finalist in the 21st Annual M&A Advisor Awards across five categories. The awards, presented by The M&A Advisor, recognize deals across several categories and industries. Award winners will be announced on Tuesday, Nov. 15. Click here for the full list of finalists.

“Since 2002, we have been honoring the leading M&A transac­tions, companies and dealmakers. Butler Snow LLP was chosen from hundreds of participating companies to become an awards finalist. It gives us a great pleasure to recognize Butler Snow LLP as finalists for mergers and acquisitions firms and professionals,” said Roger Aguinaldo, Founder and CEO of The M&A Advisor. “Butler Snow LLP represents the best of the M&A industry in 2021-22 and earned these finalist honors by standing out in a group of very impressive candidates.”

Butler Snow served as legal counsel to Amedisys in the acquisition of Contessa Health, which closed in August 2021. The transaction has been named a finalist in the following categories:

Butler Snow also served as counsel in the acquisition of BL Technology, Inc. & BLTI Services, LLC by Inframark Water & Infrastructure. That transaction has been named a finalist in the following categories: