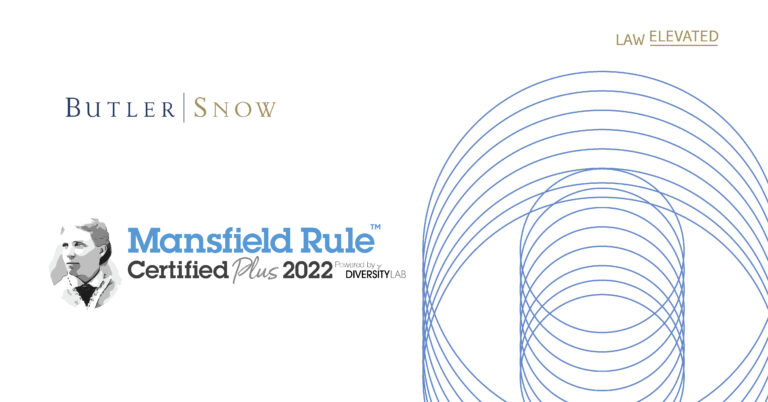 Butler Snow is proud to announce its achievement of Mansfield Rule Certification Plus after the first year of participation in the Mansfield Rule 5.0 iteration. The Mansfield Rule, an initiative inspired by the NFL’s Rooney Rule, measures whether law firms have affirmatively considered women and people of color for leadership and governance roles, equity partner promotions and lateral positions.

Inclusion and diversity are key drivers of innovation and creativity at Butler Snow, and as a firm with a culture rooted in collaboration and partnership, an inclusive environment is paramount to preserving that culture and delivering an elevated level of client service. Participation in the Mansfield Rule and achievement of Certification Plus status presents an opportunity to rise to the occasion with other firms committed to furthering diversity initiatives.

The Evolution of the Mansfield Rule

Diversity Lab first presented the Mansfield Rule at the Women in Law Hackathon in 2016; the idea, which was aimed at considering at least one woman for top leadership roles, quickly became a crowd favorite among attendees The pilot certification was officially launched in 2017 with more than 40 large firms committing to have at least 30% women lawyers and underrepresented racial and ethnic lawyers considered for leadership roles.

Mansfield Rule 6.0, a yearlong endeavor and the most rigorous to date, brings a new opportunity for Butler Snow and 180+ other firms to diversify leadership and change longstanding embedded firm cultures. The 6.0 version requires law firms to consider at least 30% historically underrepresented lawyers from all four groups when appointing to leadership roles and promoting into the equity partnership, among a dozen other activities that focus on the path to leadership. Firms must also consider 30% underrepresented talent for C-suite roles.

Certification Plus status is a higher-level certification that evaluates firms’ tangible commitment to diversity in leadership. We are proud of this achievement, which demonstrates that our firm not only took deliberate steps to expand the list of those considered for leadership positions within our organization, but also achieved diverse representation in key leadership positions during this past year.

“It takes a lot of work for firms to make even incremental changes to longstanding systems, and it is an absolute honor for the Diversity Lab team to see what these firms have achieved over the course of the year-long certification cycle,” said Kavita Ramakrishnan, Diversity Lab’s Mansfield Rule and Knowledge Sharing Senior Director.

As a firm with diverse clients, it is crucial that Butler Snow accurately reflects that diversity within our workplace so that we can foster an environment of inclusivity within the larger legal community. Our inclusivity committee, firm leadership, and recruiting practices have been working towards diversity and inclusion goals and our recent achievement of the Mansfield Rule Certification Plus is confirmation that effective change is being made.